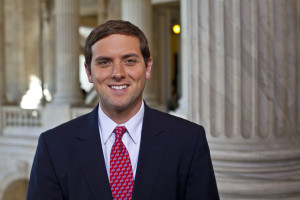 Since August of 2008, Luke Russert has served as a DC-based correspondent for NBC News. Russert is an Emmy award winning journalist who can be seen on popular outlets such as “NBC Nightly News,” “Today,” NBCNews.com, and MSNBC, where he reports on the House of Representatives from his location on Capitol Hill.

Russert made his journalism debut at an exciting time for our nation: the 2008 presidential election. In his role as a reporter, he covered both the Democratic and Republican National Conventions, offering a fresh perspective on the political establishment from his vantage point as a twenty-something journalist. His election day report, which explored the impact of Barack Obama’s win on young people, contributed to NBC’s News & Documentary Emmy award for its 2008 Election Night coverage.

After the 2008 presidential election, Russert pivoted his focus to Congress and the House of Representatives. Since May of 2009, Russert has specialized in keeping our elected officials honest through his hard-hitting coverage of political scandals in addition to offering thoughtful and thorough reports on political issues. Russert made headlines in 2010 when he received a public apology from Rep. Charlie Rangel (D-NY), who was at the time serving as House Ways and Means Committee Chairman. Congressman Rangel had criticized Russert’s aggressive questioning over an ethics report that showed Rangel’s fiscal indiscretions and illegal donation solicitations, but then reversed his stance and apologized to Russert instead. Russert also played a crucial role in the coverage of Rep. Anthony Weiner’s (D-NY) infamous sexting scandal, as he was the first journalist granted a sit down interview with the disgraced politician. On the political issues front, Russert has covered significant moments such as the passage of The Affordable Care Act, the Republican resurgence of 2010, the debt limit crisis of 2011, and the Fiscal Cliff battle of 2012. Russert has also covered the 2010 and 2014 midterm elections as well as the 2012 presidential election.

In addition to his NBC News post, Russert serves as a guest host on a range of MSNBC programs such as “The Daily Rundown with Chuck Todd,” “Way Too Early,” “Andrea Mitchell Reports,” “NOW with Alex Wagner,” and “The Cycle.” Since 2014, Russert has appeared as a panelist on NBC’s “Meet the Press.” He has also filed field reports for the show and has been a consistent digital contributor to the “Meet the Press” website.

He currently hosts “The Briefing,” an Internet TV show on Shift by msnbc.com.

While he is primarily known as a political correspondent, Russert has also reported on events that occur outside the Beltway. He has covered natural disasters and tragedies such as Hurricanes Gustav, Ike, and Irene, the East Coast earthquake of 2011, and the Boston bombings. No stranger to pop culture, Russert has appeared as a street correspondent alongside Carson Daly on NBC’s “New Year’s Eve Special with Carson Daly” and has interviewed a number of celebrities including Jessica Alba, Ted Nugent, and Usher. As part of his lifelong connection to the Boys & Girls Clubs of America, Russert will serve as Master of Ceremonies during the upcoming 30th Annual Tim Russert Congressional Dinner.

In his relatively brief career to date, Russert has earned critical praise for his coverage of important American events. In 2012, Russert reported for “Dateline” on the potential wrongful conviction of Jon-Adrian Velazquez at New York’s Sing-Sing Prison. This report was nominated for a 2013 Emmy award in the “News and Documentary” category. From March 2006-2010, Russert co-hosted the critically acclaimed “60/20 Sports” with political pundit James Carville on Sirius-XM Satellite Radio. This sports talk show attracted an impressive roster of guests such as former President Clinton, former President George Bush, Cal Ripken Jr., Lance Armstrong, and Bill Russell. In May of 2009, Russert received the Marlin Fitzwater Award for Leadership in Public Communication from Franklin Pierce University. This award honors individuals whose contributions to public discourse strengthen the spirit of democracy. He has also received an honorary degree from Wingate University in North Carolina.

Russert attended Boston College, where he graduated with a double major in communications and history. He is the son of the late Tim Russert and Vanity Fair writer Maureen Orth. Russert resides in Washington, DC. with an adorable pug named Chamberlain.